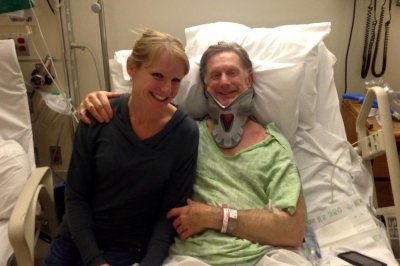 Two weeks ago yesterday, my dad broke his neck. Two and a half weeks ago, he got married.

They were on their honeymoon. They were going for a bike ride. An oncoming car was turning left directly in front of them; he didn’t see it until there was nothing to do but slam on the brakes – and go over the handlebars.

He landed on his head, breaking C6 and C7. His hands and feet went numb. He was scared.

We were too. We were supposed to go to dinner with them. I felt guilty because, while I love his new wife, their wedding hadn’t been easy for me. Their marriage was the final nail in the coffin of my once-family. I knew I shouldn’t feel that way. Things were better now than they’d ever been before. My dad was happier; my mom was, too. But still. It was my family. (Also, as a side note: In my childhood culture, divorce was/is akin to drinking alcohol or eating meat or having sex before marriage. It was a no-no. And we’ve already discussed the fact I’m a goodie-goodie.)

And so I wasn’t sure I wanted to go to dinner. It was out of the way and a drive in traffic. I was tired. I was supposed to go to spin class after work – I love spin class. And we’d just seen them at their wedding.

And so I hesitated. And then I got the call. Elyse, sobbing: “Your dad had a biking accident. He says it’s his neck. They’re rushing him to the hospital.” She was hysterical. 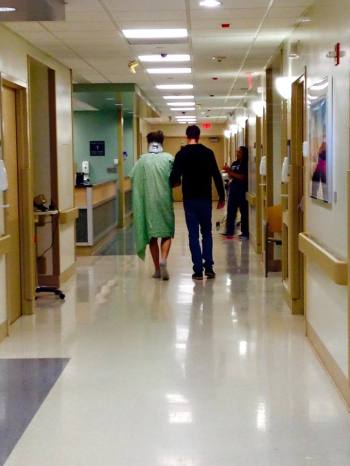 And suddenly, I was too. My mind was a blur: So little information, such a turn of events. Such guilt. Here I hadn’t wanted to go to dinner, and now the man who was my hero and role model and life rock was in an ambulance on his way to the hospital.

The things we take for granted.

And so instead of eating dinner or going to spin class or doing a thousand other things we usually do, we spent the night in the emergency room. At almost 1 a.m., my dad was life-flighted to a U.C. Davis Medical Center where they tortured him (okay, tried to fix his neck with traction) before taking him to surgery and fusing three segments of his neck. The neurosurgeon said it was a miracle he wasn’t paralyzed. The next day my dad said it was, too. He said he had “so much to be thankful for.”

And all I know is that, while his recovery has not been and will not be easy, we are so lucky to have him, and I’ll never again put exercise selfish struggles before family and the people I love. (That includes you, Elyse!) You mean the world to me, Dad. Thank you for being my rock. I want to always be yours, too. I love you.