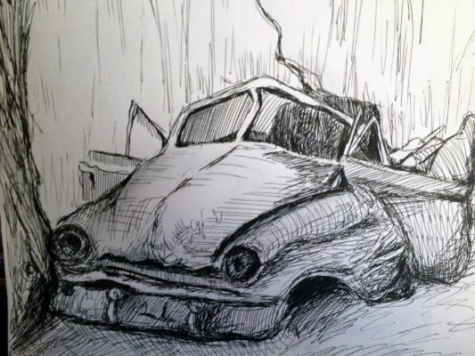 She came at me from across the busy street. I was sitting in my car with the door open, enjoying the breeze, listening to the rustling of the trees, preparing for my upcoming tutoring session. I watched her cross — alone and carrying nothing — and thought it odd, but I looked away. I didn’t expect her to stop.

I looked over. The girl appeared to be about my age and was wearing faded jeans and a baggy sweatshirt. Her reddish hair was pulled into an oily ponytail at the nape of her neck. “Uh, hi,” I said.

“My car broke down,” the girl hurried to explain. “It’s not far. My friend’s house. It’s about 5 minutes from here, off Rheem Boulevard.” She looked near tears.

Umm . . . “Uh, sure,” I said. What else could I say? “Yeah, I can do that.” I looked down at the textbooks and papers strewn across my lap and passenger seat beside me. My half eaten salad from Whole Foods sat atop the dash. “Hang on just a sec.” I grabbed the textbooks and salad container and tossed them in the back seat. The papers I gathered into a pile on my lap. “Come on in.”

The girl climbed in. As she did, I noticed — she had a faint odor, like stale sweat and body odor. I had to fight not to wrinkle my nose.

“Okay, so I’m not actually from around here,” I told her. Which was true. I travel nearly 160 miles round-trip once a week to tutor *Sophie right now. “Where are we going again?”

“Rheem Boulevard. It’s that way.” She pointed to a road on our left.

“Okay.” I turned on the car and began driving in the direction of her finger. She didn’t say anything else as we went, and the silence felt awkward; I used it as an opportunity to introduce myself. “I’m Jessica,” I said.

“Do you not have a cell phone or anything?”

“Oh . . .” I was at a loss. Stacy seemed prone to lapse into silence between my attempts at conversation. But then she surprised me.

“You’d think people in Moraga would be nice, but they’re really not,” she said. I assumed she was talking about her car. I waited for her to say more, but . . . nothing. I understood what she meant, though. Upon my first visit in Moraga, as I’d watched Mercedes Benzs and BMWs drive through its hilly terrain, I’d felt a strong impression that these people were, if not selfish, very self-absorbed. No one made eye contact, and there was an intense “keeping up with the Joneses” type feel throughout the town. Thankfully Sophie’s family was an exception.

“I know what you mean,” I said after a moment. I looked at the clock. 5:50. Were we close? I didn’t want to be late . . . Then it occurred to me: Had I been foolish? After all, I knew nothing about this girl. Could I trust her? I glanced at her through the corner of my eye, but her face was blank; I could detect nothing. “Are we getting close?” I asked finally.

“Gotcha.” I turned on my blinker and turned left at the street. “Now where?”

“Thanks so much,” she told me as she got out the car.

“Hey, no problem,” I told her. “Good luck with your c–,” but she was already shutting the door and walking towards the front door.

Well, that was interesting.

As I drove away — I now had five minutes to get to Sophie’s — I thought about my concerns on the drive over, and how sad it was that I even had to worry about whether or not helping a stranger was the right thing. I knew for certain I wouldn’t have helped Stacy if she’d been a man. Was that because it really wasn’t safe to help a man, or . . .? Or was it something else?

It’s a strange world we live in, but I, for one, want to be kind, helpful, and generous whenever possible, no matter what the risk or ultimate return.