To get away from numbers, though, let’s look at headlines. “Missing Illinois bartender found shot dead.” “Toddler finds gun, accidentally kills playmate.” “White cop shoots black man during regular traffic stop.” I am disturbed every time I look at the news. People die from gun wounds EVERY DAY in the United States.

And yet we are silent.

By now most everyone has heard about the steps Australia and Japan and the United Kingdom took to curb gun violence on their home fronts. Australia did a huge gun buy-back program; Japan requires intensive training and testing to own a gun. The U.K. banned private handgun ownership and bought back tens of thousands of guns from its citizens. In Hong Kong, where I lived for a year, citizens were never allowed to own guns in the first place. I felt safe in Hong Kong. I don’t feel safe in the United States.

Since the Las Vegas shooting, though, what have people been talking about? Sure, there’s been talk about stricter gun laws, but we Americans have this tendency to focus on effects rather than causes. Just like we still take our shoes off at airports because of one incident years ago, I’ve heard more discussion about screening hotel guests’ luggage than I have about making it more difficult to buy guns since the massacre at the Mandalay Bay.

Notice that I said “making it more difficult to buy guns.” I didn’t say, “Do away with all guns,” or “Only law enforcement officers should have guns,” or “All guns are bad.” Having lived in the South for a few years and having made many wonderful friends here, I can easily see how guns and hunting, etc. are a big part of the culture here. What worked in other countries will not necessarily work in the United States. You can’t come in with sweeping measures that many oppose and expect to find success. But surely there is a middle ground we can all agree on? Surely the reasonable gun owners in the nation would be willing to make some concessions on the kinds of guns they need to own — and the process they’re willing to go through to get them — if it meant keeping a larger majority of our nation safe? If it meant keeping machine guns out of the hands of maniacs?

We have no one but ourselves to blame.

Below are a couple of videos I’ve posted previously on my blog talking about gun violence and the need for change in our nation. They’re worth the watch.

*Note: This post was originally written for my friend Sreejit, an amazing blogger who’s currently featuring other writers in his “Rage Against the Machine Month” on his blog, found here. He’s asked me to write a post for him many times, and I’ve never followed through — until now! Stay tuned for a tie-in to my last post next time.

Please watch the videos as they are part of the post!

As a blogger in the United States, it would seem negligent to avoid the topic of the recent shooting in Las Vegas. Everyone wants to voice their opinion on that, right? Well . . .

Those of you who know me know that I don’t like controversy — especially here on my blog. It has taken me a few days to collect my thoughts. If I’m going to approach this topic at all, I’d better have thought things through, right?

This time, however, the more I’ve thought, and the more arguments I’ve heard for and against stricter gun control, the more hopeless I’ve felt. Even when presented with statistics proving the relationship between the growing number of guns and gun-related deaths in the United States, a large percent of the population still feel their rights are being violated if laws are passed to make it harder to obtain guns. Many of these people grew up with guns. Many shot guns in their backyards as kids. Many enjoy hunting. Many want to be able to protect their families if someone ever invades their homes.

Okay, I get that. I do. But what about the other side of the coin?

It occurred to me on a run the other night. I have this bad tendency to run later than I should, and it’s crossed my mind that someone could pull out a gun out and shoot me through their car window at any time. It’s an awareness I’ve grown used to, but it was something of an epiphany when I realized recently that, if I were in Australia, for example, this fear would be unfounded.

But even if you take away guns, crazy people are still going to kill people. They can use knives, bombs, cars, all kinds of other sh*t.

True. You’re absolutely right. Stricter gun laws won’t keep crazy people from doing crazy things. But, as was illustrated in the video at the beginning, there is no disputing that more guns means more deaths, period. Also, it’s interesting that driving is a “privilege” while owning a gun is a “right,” is it not? 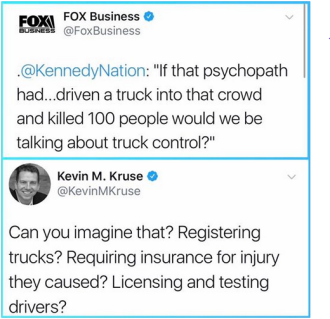 So what do I propose? I have no idea. I’m just tired of being laughed at. I’ve talked to a number of friends around the world who can’t understand America’s obsession with guns and denial of their harm in the face of clear evidence to the contrary. I also agree with an American friend who referenced The Onion on his facebook page recently. 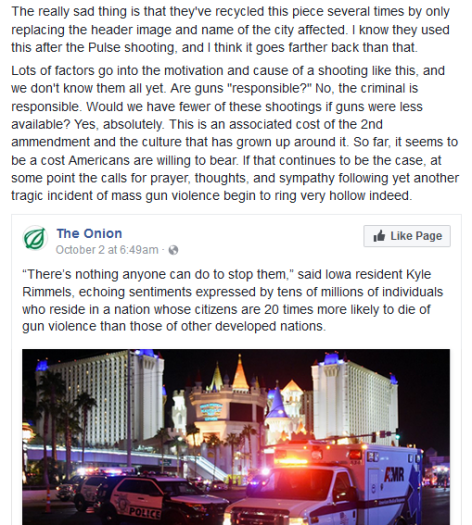 “This is an associated cost of the 2nd amendment and the culture that has grown up around it. So far, it seems to be a cost Americans are willing to bear. If that continues to be the case, at some point the calls for prayer, thoughts, and sympathy following yet another tragic incident of mass gun violence begin to ring very hollow indeed.”

I’ll close with a video from Trae Crowder* **, the “Liberal Redneck,” an up-and-coming comedian who’s making a career in Hollywood by playing off of his Southern roots. (I actually hesitate to do so. Studying Rhetoric has increased my awareness of the damage labeling does and the ways in which it perpetuates stereotypes and other negative phenomenons in society. It cannot be denied that stereotypes do exist, however, and Crowder contests pro-gun arguments from a perspective I cannot, as I have never owned a gun and originate from the “left coast,” “wrong coast,” and the “land of fruits and nuts” [a.k.a. California].)

*Interestingly, in researching Crowder, I realized he’ll be speaking in downtown Knoxville tonight and tomorrow night. You’d better believe I just bought my ticket. (There are some real benefits to living in a college town!)

**Please note that some may find Crowder’s language offensive. He makes some d*mn good points, though, and while I may not agree with everything he says, I appreciate his perspective.

p.s. You’ll only give an angel wings if you’re respectful of others’ perspectives in the comments section. 😂