A few posts back, I talked about the missing piece from my rock-climbing story. I was raised Christian and went to small Christian schools all my life, including college. When I had my accident, the entire student body at the university I was attending prayed for me. Both people I knew and people I’d never met watched as I went from nearly dying to fully recovering—a miracle they attested to the power of prayer.

I’ve already talked about how this incident affected me—how I slept through it all and came out an incredibly sick girl on the other side.

But there certainly are spiritual implications to my story. I cannot deny that prayer is what brought me through (it certainly was no power of my own): to say otherwise would be a slap in the face to both God and my dear friends . . .  This is true even if I don’t really know what God looks like.

I asked a few friends if they’d write down their remembrances, so anyone interested could hear my story from a different perspective. Here are two of their stories. Chad Stuart and Hilda Thordarson-Scott, from the bottom of my heart, thank you. 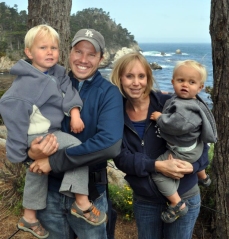 Chad Stuart was the student chaplain at Southern when I had my accident. Today, he is a pastor in Visalia, California. Here he is pictured with his wife and two of their three sons.

It was late on Saturday night, January 25th when I first received news that one of our students had fallen while rock climbing. That was all I heard—no name, no details. Just that an accident had happened. I said a quick prayer, but other than that didn’t give it much thought. I was in Ohio visiting my parents for the weekend. There really wasn’t much I could do.

The next day, around noon, I turned on my phone and saw several messages. The messages were from the student deans and our secretary at school. They were all updating me about what I now realized was a very dire situation. END_OF_DOCUMENT_TOKEN_TO_BE_REPLACED

The old woman lay dozing. Mussy hair framed her pale face; the hair was white, like snow. IVs pumping clear liquid ran between needles in her wrists and plastic bags beside her bed. She was tall, and very, very thin.

“Hello, Mrs. Andrews? Are you awake?”

“Didn’t mean to startle you,” said my dad. “I’m Dr. Cyphers and [motioning to me] this is my daughter, Jessica. We came to wish you a Merry Christmas.” END_OF_DOCUMENT_TOKEN_TO_BE_REPLACED