I honestly had no idea I was grimacing this much . . .

A week and a half ago, I had to run a half marathon.

I am not a runner. As a kid, I hated running. I picked up running as a teenager when I discovered just how terrible I was at sports. I loved being active, and if I couldn’t make the varsity basketball team, well . . . After my rock-climbing accident, I discovered cycling. My right shoulder was severely damaged in the fall, and in the months that followed, my right arm couldn’t swing properly. Running was out of the question; cycling, on the other hand . . .

I got my first road bike for my 21st birthday and was hooked. I still ran often because, let’s face it, putting on a pair of running shoes is a lot simpler than pumping up bike tires and fixing flats, but, in reality, cycling had my heart. That’s why the furthest I’d ever run until October 20th was seven miles. That’s why the furthest run I’d done recently was six.

I’d always thought about running longer distances, of course. I had friends who’d run half and full marathons and reveled in their dedication. How could I not admire someone who purposely put their body through that much pounding? I wondered if I could do it, too—and knew deep down that I could—but I hesitated to sign myself up for the task. Why would I, unless I had to? END_OF_DOCUMENT_TOKEN_TO_BE_REPLACED

Grr . . . My post on my half marathon is almost finished. Almost. But, as I’ve been working on it for several hours now and have to work in the morning, I’ll have to leave you with this teaser for now.

This is me and a lovely Asian woman on the last stretch of the Nike Women’s Half Marathon in San Francisco last Sunday. I’m giving it my all, and . . . Well, for a laugh, just compare the looks on our faces!
.. 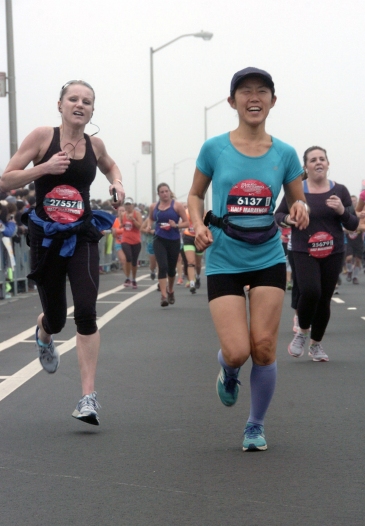 Image: Mine and Nike’s