But that doesn’t mean I’m not glad I did last week’s race. It didn’t go as planned — didn’t go well at all, actually — but it did go, and it was a learning experience. I am ashamed to say I didn’t complete the run. There were a lot of factors aimed against me — a late swim start and a 30-minute flat tire among them — but, ultimately, the failure was my own. I wasn’t as strong as I needed to be, and it hurt me.

Almost comically, before the race, the editor at the Windsor Times asked me to write an article about my experience. He would publish it in the paper; I would be in the news. Oh boy. I was excited by the prospect initially, but then . . . Really? I had to write about the race that I failed?

Below is the *article I sent him. You’ll notice I left out the race’s ending entirely. I just couldn’t admit to the world that I couldn’t do it. Couldn’t admit that I wasn’t strong.

Funny that I feel comfortable sharing that here, with you.

A day in the life of a Vineman

4:30 a.m. came early. Ugh. Was it really time to get up already? I stumbled out of bed and gathered my things. Water bottles, electrolyte tablets, Bonk Breakers, goggles, running shoes, helmet, etc.—it’s amazing how much stuff you need for a triathlon. I’d made breakfast the night before—a nutrition shake and two scrambled eggs. In my previous event, the Monte Rio Olympic Distance Triathlon, I’d skipped breakfast and ended up “bonking” halfway through the race. That was not something I wanted to repeat.

The drive to Guerneville was smoother than expected. With approximately 2,300 athletes competing in the 25th Ironman Vineman 70.3, I’d been warned that traffic on River Road could be bad. But, as the twinkling stars dissipated and the sun’s rays began streaking orange into navy skies in the distance, the stream of taillights before me kept moving. There was no stop-and-go anywhere.

The race was starting at Johnson’s Beach. My boyfriend Jon and I parked our car about a half-mile away on Highway 116 and rode our bikes in. Jon wasn’t participating but had come to to cheer me on. All along River Road and on Guerneville Bridge I saw people jogging and stretching and completing various other pre-race rituals. I started to get nervous. I hadn’t been planning to warm up. Should I? But, I needed to save my energy for the race!

To be honest, I trained a lot for the cycling and running portion of this event but not as much for the swim. I was also unsure about nutrition. It takes a lot of calories to fuel an athlete through a 1.2-mile swim, 56-mile bike ride and 13.1-mile run. This was my first half Ironman, and, without the experience of years, I wasn’t sure how to fuel or what to expect. I was about to find out.

In line at the transition area, 6:30 a.m. Some swimmers had already started. My swim wave wasn’t until 8:42.

There were athletes everywhere and a buzz of excitement at Johnson’s Beach. At the gate I dismounted and got in line for the transition area. I needed to set up my bike and bike needs so that, after the swim, the switch to my bike would be easy. As I waited, I watched other waves of swimmers take off. “Honk!” went the air horn, and then the next group of swimmers moved in. I, unfortunately, was in the very last swim wave at 8:42 a.m. It was almost 7 a.m. now.

The rest of the race is a blur, honestly. The Vineman 70.3 course takes participants up and down the Russian River, through four different grape growing regions—the Russian River, Dry Creek Valley, Alexander Valley, and Chalk Hill—and then around Windsor High School. It is advertised as one of the most beautiful courses in the world, and, as many who raced Sunday would attest, it lives up to its name. We had incredibly good weather on Sunday, too, which made a big difference for me. Eighty degrees is a lot more bearable than 90. The only unfortunate thing was that I got a flat tire on the bike ride and, in changing out my tube, lost all of the carbon dioxide out of my CO2 cartridge. I’d only brought one, so I then had to wait for 30 minutes for the sag wagon to come help me. What a delay!

All in all, participating in Vineman was a great experience, one I hope to do again next year. There is nothing like the thumbs up or “Way to go!” from a fellow athlete when you’re plugging along on the field, and Sonoma County is truly a beautiful place to race. If I learned anything, though, it’s to spend more time training for the swim—I was shaky when I got out of the water—and to bring an extra CO2 cartridge!
..

*To read the article in the paper, click here: A day in the life of a Vineman
..

The Russian River where the swim took place. 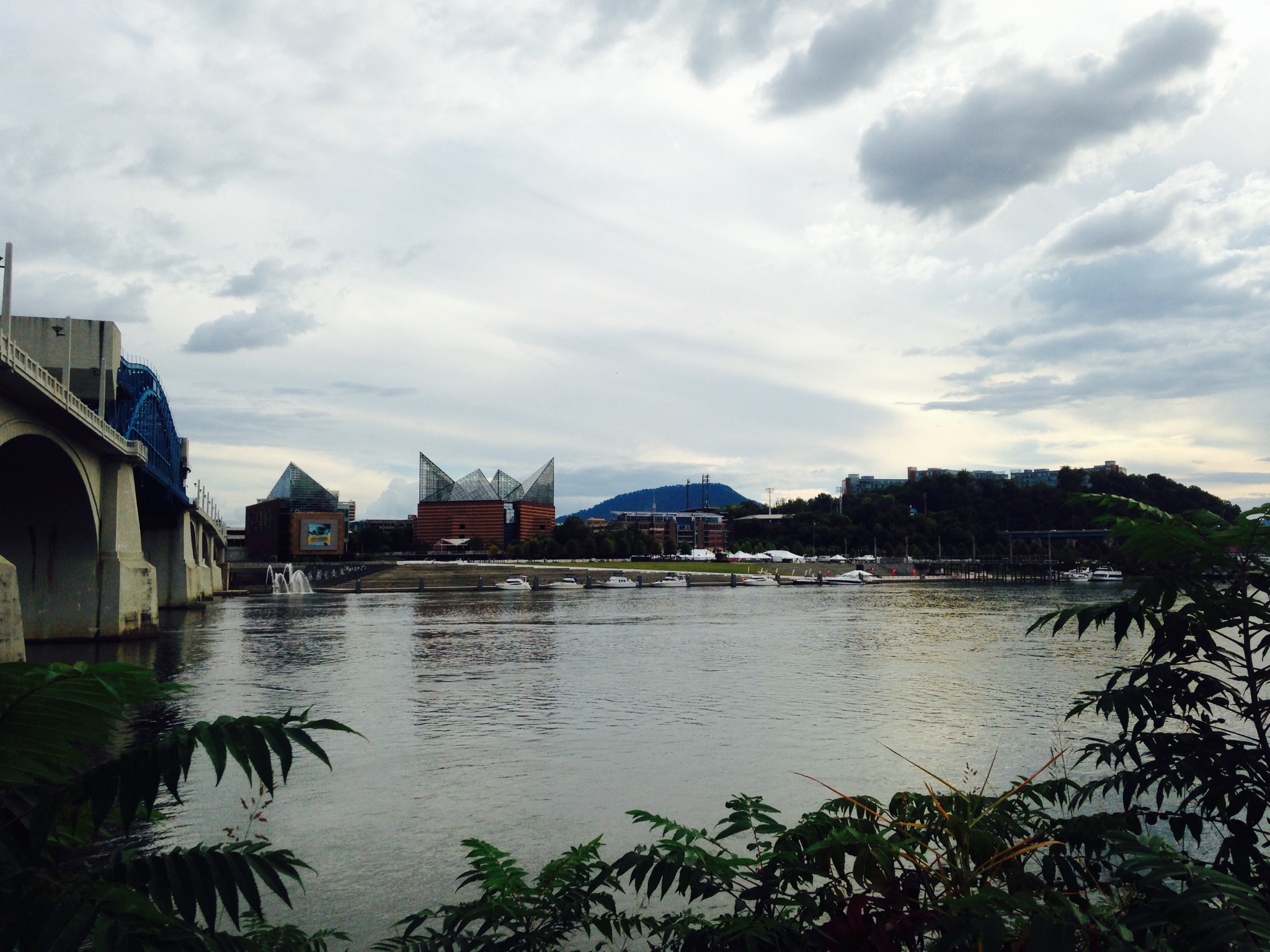 When words fail, what do I have left?

This past week Jon and I went back to Chattanooga for his Ironman. It was Chattanooga’s first, and Jon’s, too, and was something he’d been looking forward to since before we met. And…

It was good to see his friends and family, and good to be able to help him reach his goal. His training hadn’t exactly been what it should have been (for a lot of reasons), and I was proud of him for finishing. But… then…

Why was it so hard for me?

Why is everything so hard for me? END_OF_DOCUMENT_TOKEN_TO_BE_REPLACED