I’m on Craigslist looking for apartments in the Bay Area. Jon got a job in Berkeley, but Berkeley’s super expensive, so we’re looking east, in Lafayette. Lafayette’s expensive, too, but here’s a one-bedroom condo for $1,000/month — a steal for Lafeyette. And so I email the guy, “I’m interested!”

The next day, I hear back.

The owner — “Kelvin Allen” — says he’s relocated to Ohio. He includes an application in his email — if I’m approved and “will wire him the deposit,” he’ll mail me the keys and leasing documents “the same day.”

But I want to believe him. Jon and I drive to the location and check out the exterior. It’s a nice neighborhood and not far from Jon’s job. The interior pictures look nice. If this is the real deal . . . We text the guy “yes” and head home. Later, at 11 p.m, Kelvin texts back. “You’re approved. When will you send me the money?”

Tomorrow comes (Friday, my birthday) and Kelvin starts texting. “When will you send me the money?” Geez! It’s 8 a.m., dude. Chill. Jon’s getting suspicious. He looks up the address. It’s listed as a three-bedroom apartment on two other Web sites — for $2,500. He looks up the apartment’s previous owners. Kelvin Allen isn’t there.

I send Kelvin the listings for “his” one-bedroom property. “?” I ask.

Kelvin hesitates. “Oh, yes! I am only renting out one of the rooms.”

“The realtor is renting the other ones for me.” 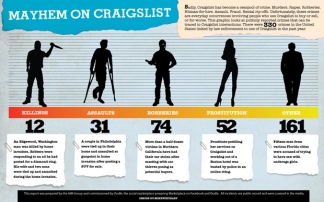 “So we’ll have roommates, then?”

“No. There is a separate entrance.”

“Have you even seen the property?”

“So are you going to send me the money or not?”

“Why should I trust you?

“I am a good Christian. If you think I would try to cheat people out of their hard-earned money . . .”

Do you use Craigslist? If so, what for? If not, why not?