Ten years ago today (January 25, 2003), I fell 80 feet (24 meters) while rock climbing at T-Wall, a popular climbing site in Tennessee. The doctors said I might not live; when I did, they said I’d never be the same again. Today, not only am I “normal,” most people don’t even know this incident ever happened. This is my story.

The sun was falling from the sky. Once it dropped below the hills, all light and warmth would disappear. The clouds were chameleons: yellow, pink, and purple. Somewhere a bird twittered.

An icy wind crept into my jacket. I shivered. Beyond the edge of the mountain, a silhouette was standing far below. “Just remember what I said,” my friend called.

Just remember what he said.

I took a deep breath and leaned back. My harness cut into my jeans. I couldn’t feel my fingers.

I looked at the complicated system of ropes and carabiners before me, then at the small tree the ropes were attached to up above. Here we go. All I wanted was to get down and get warm.

Grabbing the rope above the carabiner with my left hand, I loosened the rope with my right, and then I hopped. Braaake. That wasn’t so bad. I tried it again. Grab the rope. Loosen the rope. Hop, hop. Braaake. This time, I descended a little further.

I actually enjoyed belaying. Bouncing down the mountainside, feet first, weight in a harness, I felt like I was on a trampoline. It was fun. But this was the first time I’d ever self-belayed — this time, my rope was my partner.

Some people talk about near-death experiences as though the sky opened up and angels sang and the good and the bad—their entire lives—flashed before their eyes in a split second. I’m here to tell you that that’s crap. At least it was for me. Despite floating in and out of consciousness while I nearly bled to death at the base of the mountain and talking to the paramedics when they finally arrived two hours later, I don’t remember anything about my accident until I woke up in the ICU three and a half weeks later. Nothing . . .

When he saw what was happening, my friend tried to grab the rope to stop my fall. It didn’t work. Instead, I nearly landed on him. I crumpled onto my stomach. Rolling me onto my back, he saw blood pulsing from a gash on my head. My right shoulder and jaw were askew. I didn’t look good.

January is early in the year for rock climbing in Tennessee. It’s a cold country. We’d seen other climbers earlier in the day; now, we were alone. My friend had no choice — he left me and ran.

He ran the mile down to the gravel parking lot. When he arrived at my car, he saw glass on the ground. The driver’s side window was broken. He searched for my cell phone; it wasn’t there. My wallet was gone, too. Thieves are notorious for breaking into cars to steal climbing gear.

There was nothing else to do. He drove like a madman. At the first house he saw: Knock! knock! knock!; no answer. At the second, he heard gun shots. Seriously? Finally, at the third house, someone answered the door. “Hu-hullo?” He called 9-1-1. They gave him a blanket. He raced back to where he’d left me.

I’d been a good girl. I hadn’t gone anywhere.

In the dark and cold, we waited.

A climber at T-Wall. I can’t find any of my own old photos… They’re all on my old computer. :( (image: granitearches.com) 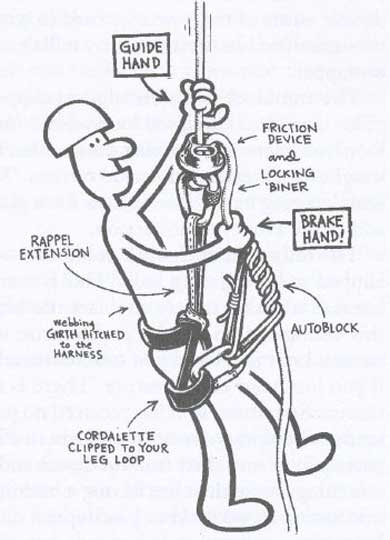 Google map of T-Wall and other climbing locations in Tennessee

End of Part One

Note: Self-belaying is an advanced rock climbing technique that only experts should attempt. At the time of the accident, I’d been rock climbing several times but was by no means an expert. My friend was far more experienced than I, but this accident was not his fault. Sometimes, things just happen. And sometimes, they happen for a reason.