She was gangly. I was early. While I waited, sipping my cappuccino in a corner, I watched her. Except for one tangled strand at her temple, her thin yellow hair was pulled tightly to a bun on the top her head. The loose strand was hot pink. Piercings filled with metal ran up and down her ears. Her jeans were like tights.

She went outside to smoke a cigarette; icy air blasted the store as she went.

I shivered and shook my head: she was all of about sixteen.

My friends arrived, and, for the moment, she was forgotten. Lost in conversation and the catching up of years, I failed to notice her reenter the store, or the way she was camped out, vacant, on a sofa in the corner.

That is, until the text.

She was practically shrieking now. The room was uncomfortable. Suddenly, I saw her anew.

What was this poor girl going to do?

Think about it. In their earliest stages, who do children imitate? Sure, you might hear lines or certain words picked up from movies or, at later stages, school: “Oh, Junior, where did you learn that?” But I guarantee that most of kids’ behavior comes from the people they have the most contact with every day.

But kids have a hard time differentiating between fantasy and reality, you might say. Studies have shown a strong correlation between media violence and aggressive behavior in kids. True. But to whom do kids run for comfort when a bad guy comes on the screen?

Kids aren’t stupid. Even in their earliest stages, children recognize that there is at least some difference between what they see on TV and real life. I’ve never heard of any kid looking for love and acceptance from his favorite television show.

So what does this mean? Am I blaming parents for youth crime in the United States? Of course not. Every child reaches an age of reason and learns that he is responsible for his own actions. Even in mentally ill patients, there is some accountability. What I’m saying is that, instead of pointing fingers, I think it’s time for everyone everywhere to take a good look at themselves and examine what kind of person they are portraying to the world. Are we taking responsibility for our actions and exhibiting the kinds of behaviors we want our children imitating? Or are we exemplifying behaviors that lead to the kind of actions we saw in Connecticut last week?

Because, while it goes without question that better gun control is needed in the United States, with the way things are now, if it wasn’t guns, it’d be something else. You have to weed out the root of the problem to fix the problem itself. After all, there’s a reason we have to take off our shoes at the airport. 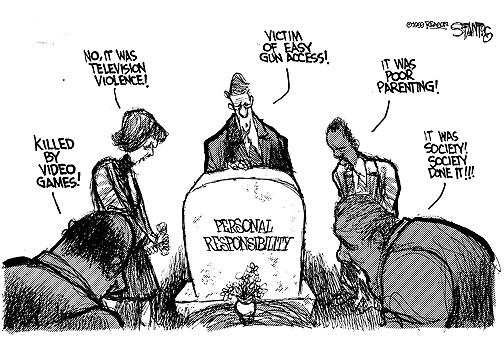